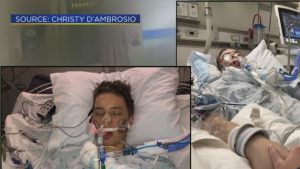 A Placer County, Loomis woman is in the NEWS appealing to others to stop Vaping as a result of her 21 year old son, Ricky D ’Ambrosio has a major lung disease and is on life support due to using e-cigarettes to deliver tobacco, marijuana and other drugs into his system. Christy D.  ‘Ambrosio said she is confused on wheather she will be going on a planned family trip or her son’s funeral. Her son is currently hospitalized, unconscious, and paralyzed in a medically induced coma. Placer county officials said there has not been any official deaths reported in the county due to vaping yet.