Whole Lot Of Shakin Going On! 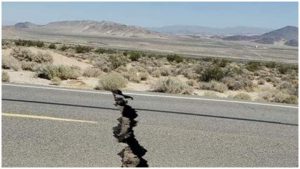 California began the New Year with a series of earthquakes that appeared to grow more powerful into the night. The latest, at 2:13 a.m. Thursday, was a 4.0 magnitude quake reported 16 miles off shore near Los Angeles, according to the U.S. Geological Survey. No tsunami warning was issued. Shaking was reported from Santa Clarita to Long Beach. A 3.9 magnitude quake was reported just hours earlier — at about 11:16 p.m. Wednesday — about 300 miles south near Morgan Hill, the USGS said. Shaking was felt from San Francisco south to King City. Earthquakes between 2 and 3 magnitude were reported near Petrolia (2.5 and 2.9) and Trona (2.7).