Another Drowning On American Confluence Tuesday! 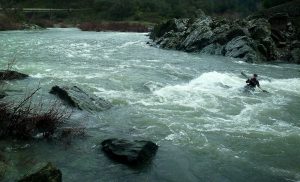 Placer County Sheriff’s were called to the confluence shortly after 5 pm yesterday in response to a call that a young man was in the river and in stress. Deputies arrived on the scene along with Helicopter Support and the man was in the river but hanging onto a tree. He eventually let go and was swept down stream in the fast current and cold waters of the American. The search continued down river until darkness forced the rescue teams to call off the search until this morning. Officials continue to try and communicate that these rivers are inviting but dangerous. This is the second incident on the river in the last few days. With the temperatures rising, more caution is urged.