Illegal Pot Farm In Penryn Shut Down With Arrest! 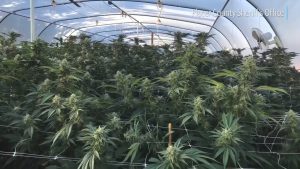 Placer County Sheriff Deputies have arrested a 29-year-old man from Mexico after investigating and securing a warrant on property on Taylor Road in Penryn. Sheriff’s reacted to neighbor complaints and when serving warrants found two hoop houses with 345 marijuana plants growing inside. Hoop houses are greenhouse like structures made of PVC pipe holding up tarps. Apolonio Chavez Guijosa of Mexico has been charged with criminal conspiracy and cultivation of pot. He worked for a drug trafficking organization that leased property from the owner and had been on the property several months creating the “pot farm”. Placer County Sheriff’s report they are finding more and more of these types of arrangements where Drug Trafficking Organizations are making business arrangements with property owners and they move onto the property and establish these illegal grows including staff to work the farm. There will be charges against the property owner in Penryn. Officials are warning that these drug trafficking organizations are often connected to Mexican Cartels who have changed their model of illegal grows in the US to these “Lease and Farm” on remote property owned by local residents, which was learned in the El Dorado County killing of Sheriff Deputy Bryan Ishmael recently. Guijosa has already posted 10-thousand-dollar bail and has been released from jail.