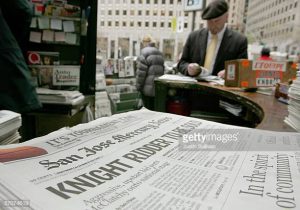 The McClatchy Company, publisher of the Sacramento BEE plus 28 other USA Newspapers was reported yesterday by Bloomberg and the Yahoo Financial Web to being in serious financial straights facing major obligations in 2020. Bloomberg quoted the third quarter earnings release and regulatory documents filed by McClatchy that stated the pension contribution that is due in 2020 will create a significant liquidity challenge to the company and that it may not be able to continue as a going concern. The company had 709 million dollars of principal debt outstanding as of Sept. 29 and it finished the third quarter with $11.4 million cash. McClatchy faces a 124-million-dollar contribution to its pension plan next year and media analyst Craig Huber estimated recently that McClatchy would only have a cash flow of 20 million dollars next year. It has also been filed that the Pension Fund was underfunded by 535 million dollars.  Several analysists who monitor McClatchy and other papers have said they believe the company will be required to file bankruptcy. Several financial firms have invested and recently increased their investments in the paper. Other analysists have noted that many old-line Newspaper companies have wrestled with “Online” publishing attempting to remain major information and advertising media, but the transition has not worked, financially. McClatchy also made a 4.5-Billion-dollar purchase of the Knight-Ridder chain which was saddled with debt. McClatchy announced yesterday they were cutting their daily publications by one day a week and will not publish on Saturday’s as of February 22nd, 2020 and enhance both the Friday and Sunday editions to cover the features and special editions that would have been printed on Saturday. McClatchy has hired consultants to address the problems, meanwhile, S&P Global Ratings forecast a grim 2020 for McClatchy and last week downgraded it by two notches to CCC-, warning that the company doesn’t have enough money to pay its 2020 obligations.