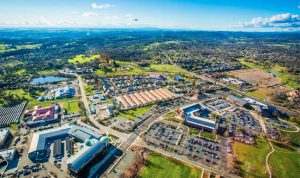 The long-awaited destruction of the outdated and out of code buildings at the Dewitt Center began this week. The first building, a portion of the former Senior Center had the roof area demolished Monday. Controversy has surrounded the long overdue project which was approved by Placer County supervisors in December of 2020. Local groups have formed support groups to try and save some of the buildings.

One success story is the Dewitt Theatre which will be saved, renovated, and put into service again to celebrate the many great performances of years gone by. Sixteen building will be demolished along with a pool. The Dewitt Center was mostly a cattle pasture and fruit orchard when the Federal Government War Department purchased the land in 1943 to house expected wounded military personnel that would be coming home from the War in the Pacific. Construction of former DeWitt General Hospital was approved on March 25,1943, with a tentative completion date set for 15 November 1943. The hospital was activated as Auburn General Hospital on August 15,1943 as Headquarters, Ninth Service Command General Order 96, dated 12 August 1943. It was designated DeWitt General Hospital per War Department General Order 48, dated 24 August 1943 and confirmed by General Order 122, Headquarters, Ninth Service Command, dated 4 October 1943. DeWitt General Hospital officially opened on 27 February 1944. Its function was “to receive and treat war casualties as well as those from the Zone of Interior posts, camps, and stations.”

The hospital initially furnished general hospital treatment for the Reno Army Air Base, Chico Army Air Field, Camp Beale, Camp Kohler, McClellan Field, and the Sierra Ordnance Depot. With cessation of  WW II and a large influx of overseas patients, DeWitt General Hospital was relieved of a majority of Zone of Interior patients except for their own duty personnel. DeWitt General Hospital “was designated a hospital center for the care of neurosurgical, vascular (both medical and surgical), neuropsychiatry (both open and closed ward), general and orthopedic surgery, in addition to general medical type of patients”.

A Dental Branch was present at the hospital as well. In 1944, DeWitt General Hospital was temporarily selected as an amputation center, but the idea was abandoned due to a lack of space and a shortage of equipment and trained personnel. Hospital occupancy peaked on 30 August 1945 with 2,310 patients. DeWitt General Hospital was declared surplus on December 31, 1945 and the War Assets Administration (WAA) assumed custody of the Site on 24 June 1946. The Site was conveyed to the State of California by quitclaim deed executed on March 15. 1947. As a part of this conveyance four conditions had to be met. According to the first, for a period of 25 years from the date of this conveyance, the property had to be continuously used as and for a mental institution. It would be one of six mental hospitals in the state of California.  The second condition stated the premises could not be resold or leased within the first 25 years without authorization from the WAA. The third condition listed the reporting requirements for the state. Finally, the fourth condition was the procedures to be followed if the first three conditions could not be met. The deed states that assets were to be transferred to the State of California.

Initially, DeWitt State Hospital could only receive patients on transfer due to overcrowding in other state mental hospitals. It was equipped to receive both mentally ill and mentally deficient patients. DeWitt State Hospital became a permanent hospital in July 1950, when it began receiving first admissions directly from local communities, including the counties of Modoc, Lassen, Sierra, Yuba, Sutter, Placer, and El Dorado. The hospital had exceeded its rated capacity with over 2,800 patients by 1960, but the number of patients subsequently declined until DeWitt State Hospital was closed in 1972. The federal government deed restrictions expired on 15 March 1972. Correspondence from the Office of Surplus Property Utilization, California Department of Health, Education, and Welfare stated that upon completion of the 25-year use of the property as a mental institution, it was the intention of the Administration to transfer the property to the County of Placer for further public use, effective 1 April 1972.

Assembly Bill No. 1748, dated 12 April 1972, created the DeWitt Hospital Authority Act to be administered by the Placer County Board of Supervisors. The act made the transfer to the County of Placer, at no cost to the county, in a manner agreeable to the county. If the county ceases to use the property for public purposes, the property will revert to the state. This act was an urgency statute necessary for the immediate preservation of the public peace, health, or safety within the meaning of Article IV of the Constitution, and it went into immediate effect. The act was made necessary because it is imperative in terms of maintenance and operation of expensive machinery and facilities that the machinery and facilities are not allowed to sit idle. During a regular meeting, the Board of Supervisors, County of Placer, State of California, accepted Resolution No: 72-392 on 27 June 1972. By acceptance of this Resolution, the County of Placer consented to the acceptance and recordation of the deed, and accepted for public purposes the real property, or interest therein or easements thereon. In other words, Dewitt Center was owned by Placer County.

Ultimately most of the Site, known as the DeWitt Government Center, served as the primary government center for Placer County. The Placer County Jail and Juvenile Detention Facility are present south of B Avenue and west of Richardson Drive. In addition, several professional services Lands surrounding the Site is developed for residential, commercial, and professional use. Much of this land is under development now with special “Work Force Affordable Housing” as well as many new buildings that have been constructed by the county for the Sheriff’s Department, Treasury and administrative needs to run the day-to-day business of Placer County, Dewitt Center is sort of in the final stages of local control transformation. All started in March of 1943, and here we are in February of 2021.