Placer County sheriff’s investigators are hoping the public can help them identify a suspect that allegedly robbed an Auburn electronics store at gunpoint.

Video of the alleged robbery was released by investigators Monday. In it, the suspect, wearing a grey hooded sweater, enters the store and walks up to the clerk.

It was at that point investigators said the suspect displayed a black handgun to the clerk, demanding money.

In the video, the clerk and the suspect are seen emerging from a back room, the clerk’s hands up in the air while the suspect is seen walking, head down, toward the exit.

The suspect is seen from additional surveillance video running out of the store toward a waiting car, which according to witnesses, looked like a dark sedan, deputies said.

Anyone with information is asked to call the Placer County Sheriff’s Office at 530-889-7893. 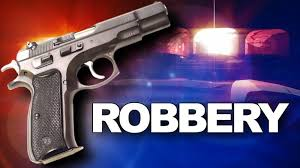