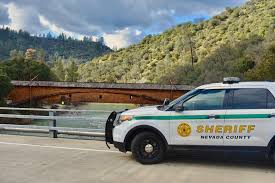 A woman reportedly armed with a knife was fatally shot by a Nevada County sheriff’s deputy Thursday in the mountain town of Alta Sierra, just south of Grass Valley.. Shortly after 1 p.m., the Sheriff’s Office received a report of a person, who appeared intoxicated, walking with two small children near Names and Alta Sierra drives. Minutes after deputies arrived at the scene, not far from Highway 49, the officer-involved shooting was reported, The woman wounded in the shooting was taken to a hospital, reported by spokesman for the Nevada County Sheriff’s Office. About 4 p.m., the Nevada County DA’s office announced that the woman died. Deputies involved in the shooting were not injured, and there were no other reported injuries. The District Attorney’s Office said the woman was armed with a knife, and one deputy fired his gun at the woman during the encounter. Prosecutors did not release any further information about the shooting. It was unclear what specifically led to the deputy using his service weapon. Officials with the District Attorney’s Office were at the scene, and that agency will be conducting an investigation into the shooting to determine whether the force used by the deputy was “justified and lawful,” prosecutors said.